Hunt for a Blue Abyss 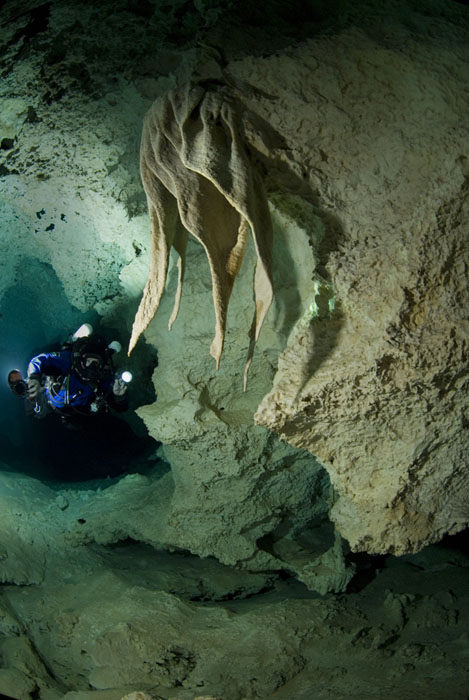 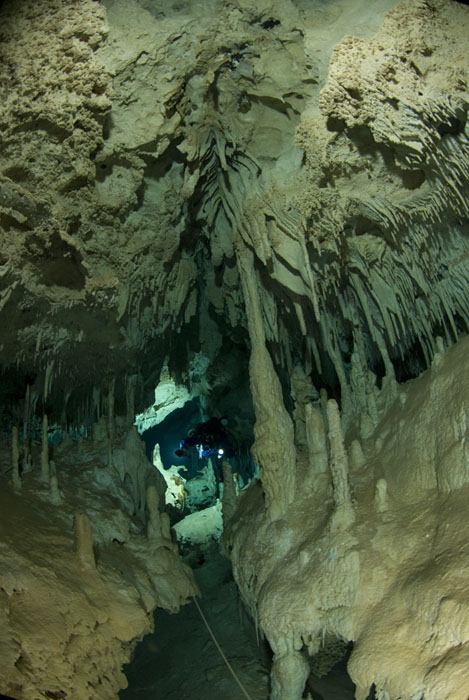 On a way back from our first River Run dive, we stopped at the dive shop at the Dos Ojos entrance and one of the managers there asked if we had done the . I heard the name before, but not much else. Curiosity peaked, I asked about it. In reply, he asked us to name the most beautiful cave that we knew. There was only one answer to that question – Nohoch.  He then told us that could take us to Diaz line in Nohoch system via couple of jumps. It would be a different line from the Mainline that we did previously, so we’d see a section of that cave we did not see before.  We were already sold on the idea of diving the when he dangled a carrot in front of us – he told us about the Blue Abyss. And then we spent a big chunk of our vacation looking for it. 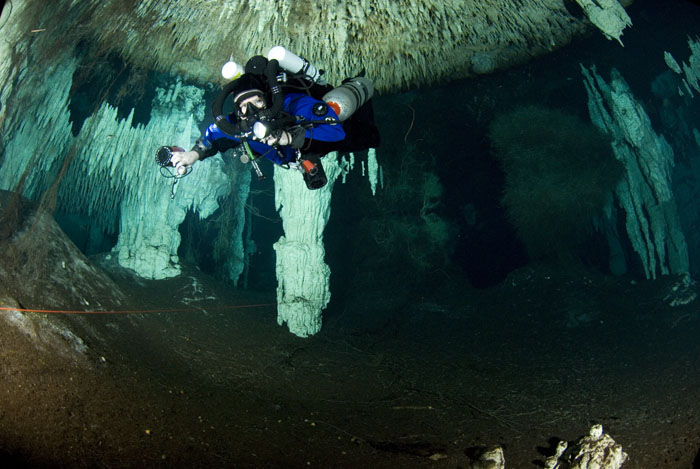 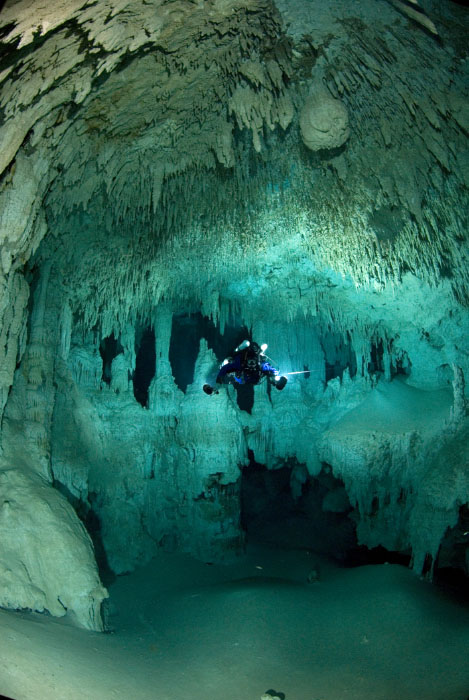 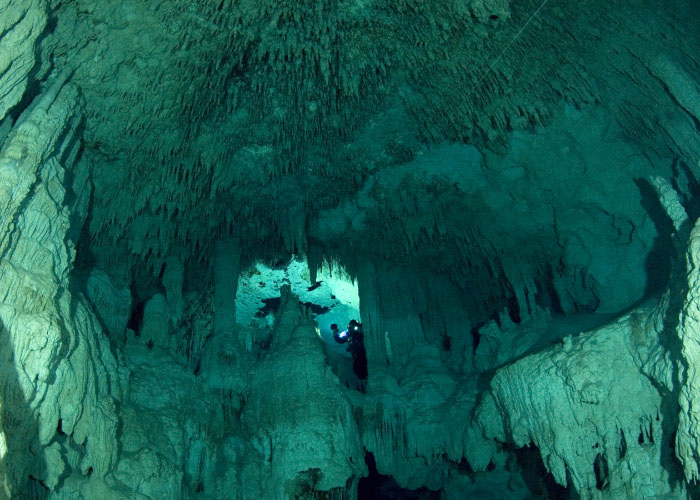 Then, once we jumped to Diaz line, the cave got tighter, decorations disappeared and the line ran alongside some huge boulders. I named one particularly large one “the monolith”. 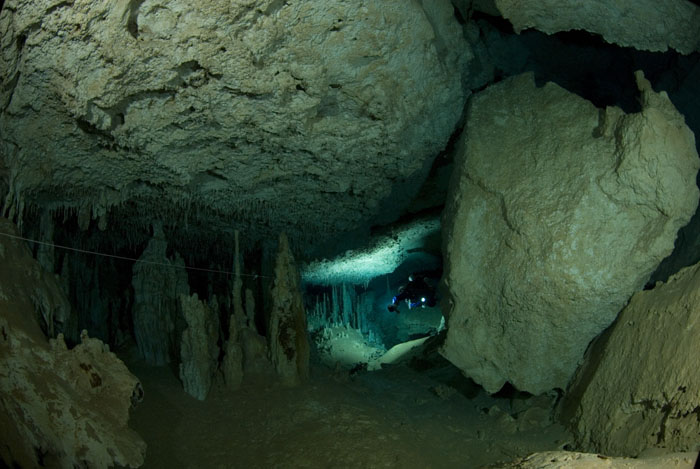 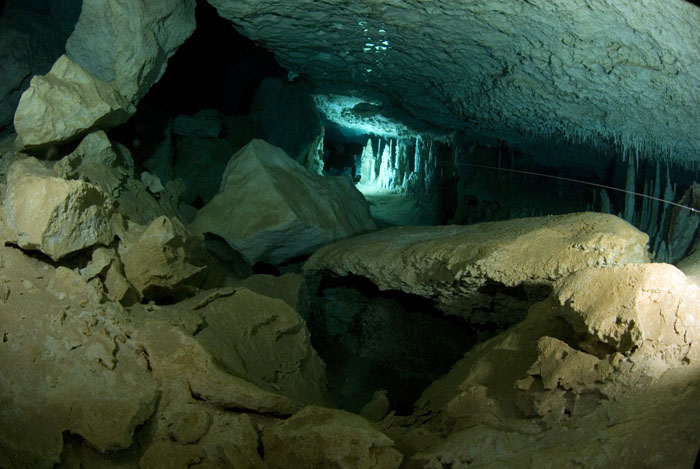 After a short swim on the Diaz line, we came to the restriction.

As I was clipping my bottle back on the other side it occurred to me that my camera-carrying buddy would have to manage both his bailout bottle and the camera. I turned around towards the restriction just in time to see a hand pushing through the camera, so I picked it up and waited until he was on my side and ready to proceed. We then swam for a long time looking for a feature that was supposed to be near Blue Abyss jump and noticing the jump markets all over the place. If I was asked to describe that cave in two words, it would be “ever-changing”. The variety was mind-boggling. 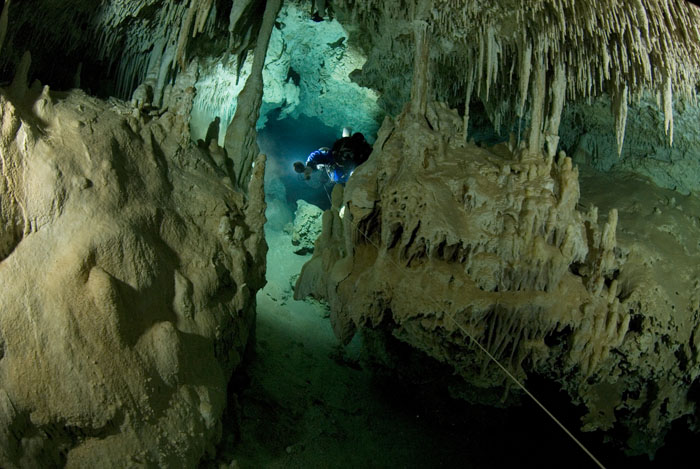 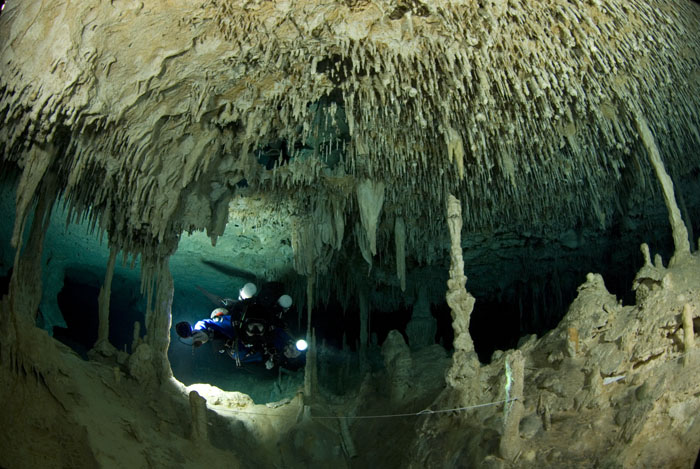 The cave changed character past the restriction area becoming increasingly decorated. Most incredible formations were everywhere. While there was only one place I needed to take my bottle off, I had to swim on my side to get though couple of other passages. 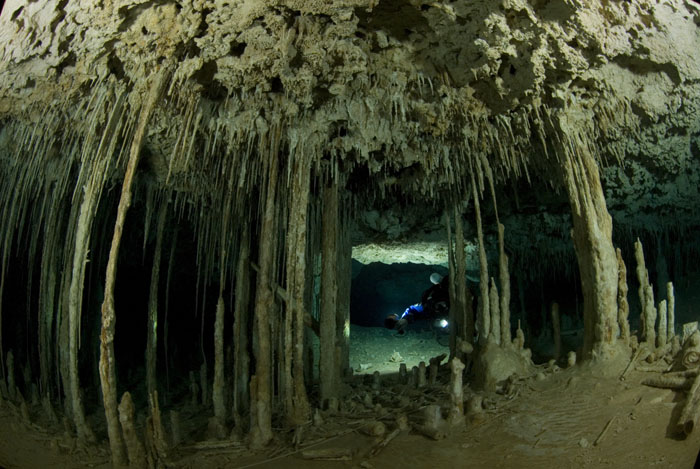 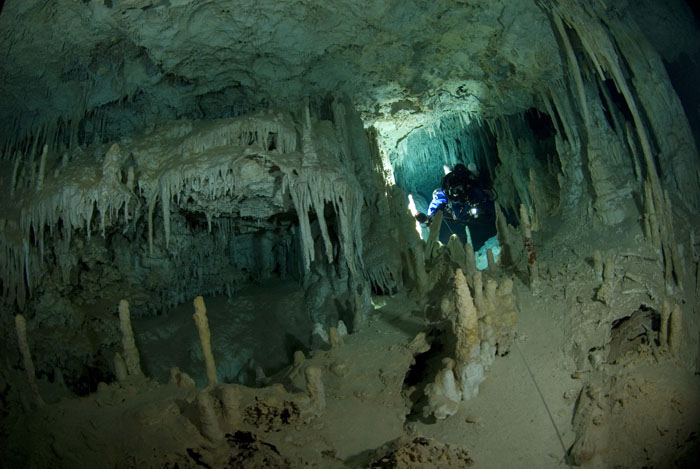 Some time later, the small decorated passages then gave way to much larger breakdown sections. Some parts of the cave had the most incredible decorations on the floors – the intricate wavy patterns that reminded me of flat sand castles. 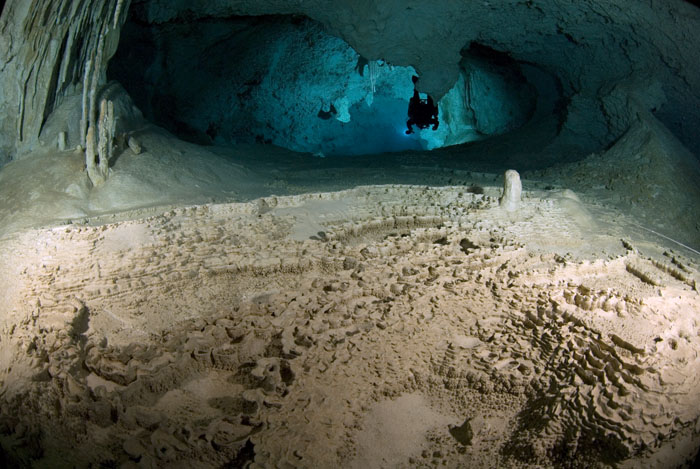 As we pressed on along the Diaz line, I started seeing the feature I was supposed to see everywhere, but none of it made sense. It occurred to me that the time estimates that we were given to get to Blue Abyss were for normal pace and we usually swim much slower than normal pace and we were also quite delayed at the restriction. When the computer showed 80 mins, I decided to abandon search, turn back and take our time shooting and check couple of jumps on the way back. We did all that for the total dive time of about 4 hrs. Given how shallow that dive was (less than 20 ft or 6 m average), it took a lot of work to achieve precision with the rebreather and the camera and we were exhausted, but we knew we’d have to come back for another try.